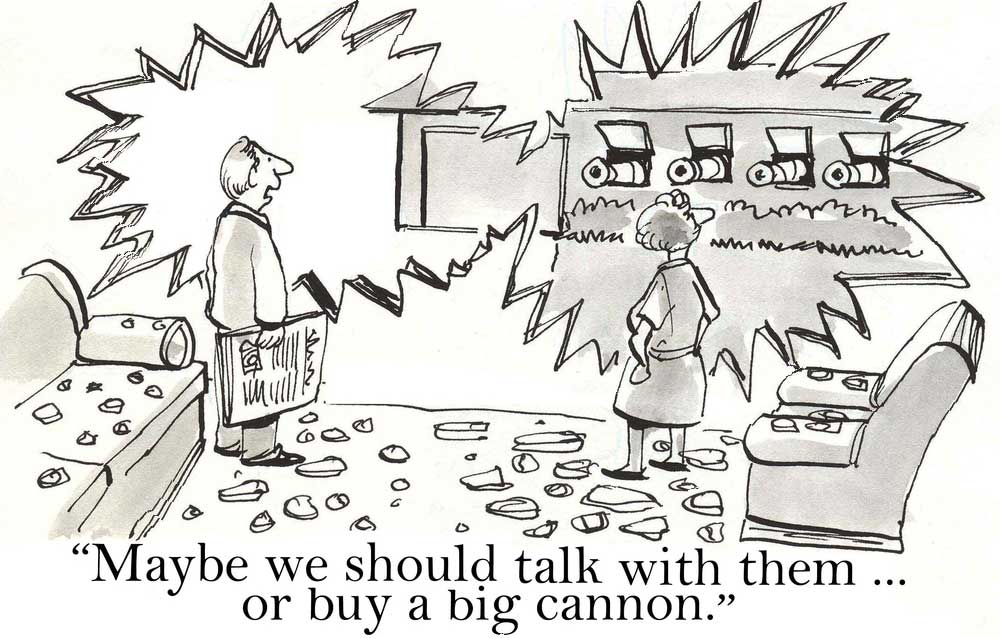 The great thing about negotiating is that it enables people – often from diverse backgrounds and polarised positions – to come together and strike deals to the long-term benefit of both parties.  You do not have to agree to do business or sign treaties.  The whole process of trading enables participants to park their differences for the greater good.

The funny thing is that negotiation often follows on from a period of conflict, the resolution of which has failed by using other methods of conflict resolution.  When the Great War ended in 1918, the victorious side imposed such draconian terms on the losing side that many believe that the Second World War was merely a continuation of the first.  In that case, the victors imposed their will (as was their right as they saw it as the winners) to the detriment of long-term peace.  An economy in ruins; disenfranchised and downtrodden people; rampant inflation – thus were the seeds sown for the likes of Adolf and his gang who, and do not let this be forgotten, were elected to power (albeit at the head of a minority government) in 1933.  They secured 43.9% of the popular vote.  As soon as the democratic process had given them what they craved, of course, that was it as far as democracy was concerned until after the Second World War.

The treaty negotiations post the Second World War were conducted from a more humane standpoint and Germany was given the wherewithal to progress as an economic and latterly as a political power.

Where people feel downtrodden and worthless, they will rise up – sometimes all they need is an excuse.  The current spate of terrorism in Europe builds upon a hatred of western democracies and all that they stand for and justifies itself on the altar of a fanatical interpretation of Islam that most Muslims just do not understand.  All of this breeds a kind of unthinking and to be honest unintelligent response from various “nationalist” type organisations that lash out at anything they perceive to be different – be it religion, colour or indeed nationality.  The chimpanzees would love to be in charge of the tea party but thankfully they’re not there quite yet!

If you look at the situation off the south east coast of North America today, you see two countries, Cuba and the USA, that have not spoken for the thicker end of fifty years.  Each has a completely different view of what constitutes “human rights”.  The Cubans refuse to acknowledge that the Americans have any right to talk to them on the subject for as long as there is a prison in Guantanamo Bay.  The Americans see themselves as the land of the free.  So what has happened?  Economic necessity; political realities; the failure of a lack of communication have all conspired to make both parties realise that “to jaw-jaw is always better than to war-war”, as Churchill is reported to have said at a White House lunch in 1954.

Neither party can be seen to “lose”, so negotiation would seem to be the best way forward.  Forget trying to persuade the other side that they have been wrong all this time; recognise that imposing your will forces the other side to give in; think instead about solving the immediate problems, then negotiating a long-term solution.

This, of course, is difficult for it forces people to confront their differences and, to an extent, forgive and forget.  In Northern Ireland there is the occasional backlash from those who cannot, but, by and large, the country is in a far better place than it was thirty years ago.  Syria, Afghanistan, Iraq, Iran have all to go through the pain - as do their enemies, of solving problems, then negotiating long-term solutions that give hope.

Oh – and can we drop religion as an excuse?  Catholics, Protestants, Shiites, Sunnis, and all the rest of you; do what you want to do – just don’t bother the rest of us with your nonsense and stop trying to convert us all to your way of doing it.  And that might be the starting point of another blog…

Robin Copland
More by Robin Copland:
Nuclear Deterrent. Is It an Option?
The Precedent
Back to Insights