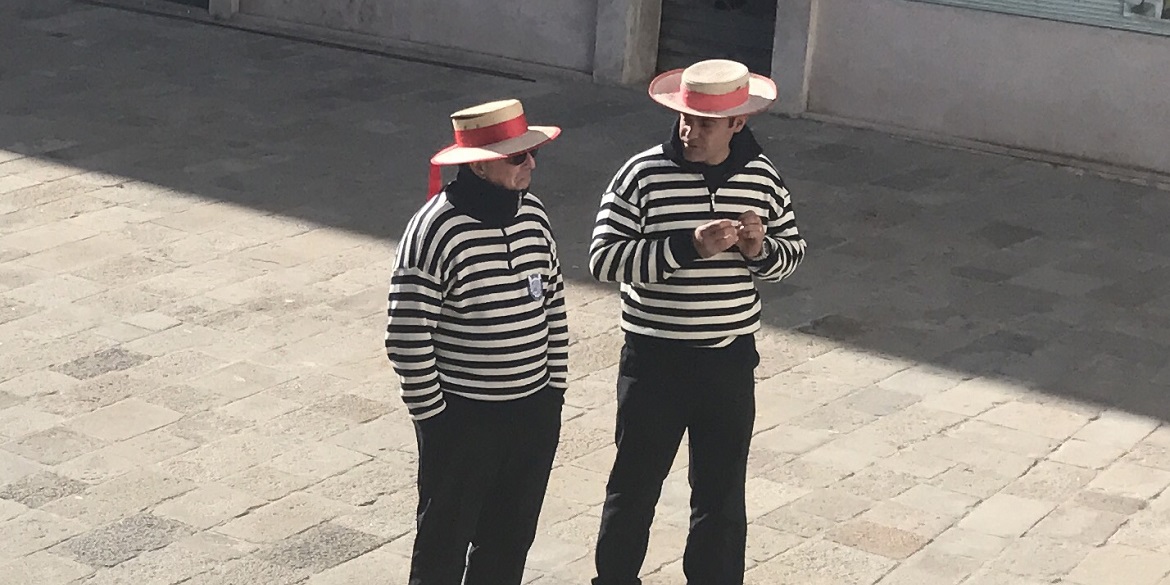 Earlier this week with friends in Venice for the end of Carnevale. Thousands of people milling around St Mark’s Square watching the processions. Hundreds of human mannequins dressed up in renaissance costumes, wearing outrageous face masks, and posing for the photographers and the tourists. The hotels and restaurants bursting, the gondoliers fully employed, even at €80 for 30 minutes. There is a real buzz in the city, and the unseasonal warm weather and blue sky was the cherry on the cake. We couldn't stop smiling.  Carnevale is an experience which should be on everyone’s bucket list.

And then it is Wednesday, and it is all over. The crowds have melted away, the Venetian poseurs are back at work and the streets resume a sleepy out-of-season feel. Restauranteurs and shopkeepers are at a loose end; there is little business around. Walking across a bridge where there are empty gondolas we were approached by a gondolier offering his services. Our friends were keen, but my wife is unconfident on water at the best of times, and was particularly wary of the way his gondola bobbed and swayed in the swell. We politely thanked the gondolier and declined.

20 more steps and he is by our side again. How about €70 for the half-hour? Thank you but No. Wait, he said, we surely would say Yes if he offered the experience for €60? My wife explained her problem with motion sickness. He pointed to the gondola, which was still rocking to-and–fro in the water, and informed her that it really was very calm and she wouldn’t feel a thing. His persuasion would not even have fooled a blind person because the sound of the water slapping against the side of the boat was noisily penetrating. He offered to throw in some singing for the price, maybe to drown out the sound of the slapping waves, but even he knew that O Sole Mio accompanied by retching would be less than romantic. We walked on.

Later that day in another part of town we came to a jetty where an outsized gondola ferried people across the Grand Canal for only €2; a journey which lasted just a couple of minutes. Our friends went for it, but the water was still choppy and my wife declined again, even though the alternative was a 15 minute walk over the Accademia Bridge.

Gondoliers need to understand that before starting to concede on the price it is worth asking if it is the price which is the problem. Because if it isn't the haggle is a waste of time.

A tip which applies to most other negotiators as well.

Stephen White
More by Stephen White:
Sir Ivan Rogers - The Power of Disruptive Behaviour
My Mother and the EU
Back to Insights