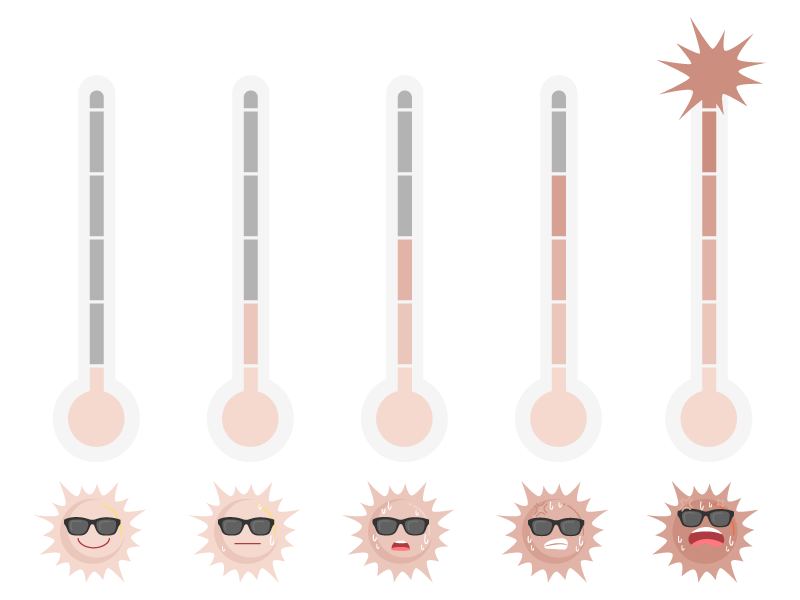 As my grandma used to say, I like it warm, but this is too warm.

The UK looks like it’s about to hit an all-time high temperature record of 42 degrees, in Doncaster of all places! Even the weather reporter was shocked that a northern town would snatch this dubious honour from the normally sunnier south. Seems like levelling up is working after all, even if Boris Johnson didn’t quite mean it in this way. (Did anyone actually figure out what Boris meant? Answers on a post card).

If you haven’t heard the Podcast ‘Boris’ on BBC sounds, give it a go, fascinating insight into the man.

When it gets hot the UK goes into overdrive. “Blowtorch Britain”, “Britain is Melting”, “Sunny day Snowflake Britain had a meltdown”: The Daily Mirror, the Sun and the Daily Mail respectively.

There is a part of the brain called the hypothalamus, which is responsible amongst other things, for controlling body temperature, thus keeping it at the optimal temperature in hot or cold conditions.  It does this by sending signals to the body to start sweating if it gets too hot or shivering if it gets cold. Higher temperatures can stop nerve fibres from working properly. This means that sometimes messages cannot get through to and from the brain.

Interestingly the hypothalamus is also accountable for controlling emotional response. Anyone else feeling a bit more irritable than normal?  Well, I am so get st@*&ed!

Many psychological studies confirm that intense heat negatively affects people’s cognitive abilities: it reduces their ability to concentrate, promotes aggression, and makes them more critical of others. These changes in perception do not help us one bit in the negotiations which we have to deal with, whatever the weather.

Economists at the University of California at Berkeley conducted more than 60 studies and found that heat can even promote conflict. The link between weather conditions and political or social conflicts is, they concluded that the warmer it got, the more conflicts were initiated between groups.

For negotiations in a business context, this means: keep a cool head as much as possible! This can be the key to success, especially in sweltering conditions.

How do we do this practically?

How about taking regular breaks or adjournments? A planned break to consider what has been said and adapt one’s preparation to take into the next round of talks will help.

Keep hydrated and cool and try not to generate even more heat by simply arguing. Listening attentively and without prejudice to understand your counterparty’s position will hopefully create an environment of trust and provide new solutions that work for both (or all) parties.

When the heat is on. Stay in control. I’m a big fan of that.

Alan Smith
More by Alan Smith:
Time Is Running Out
What’s it worth?
Back to Insights