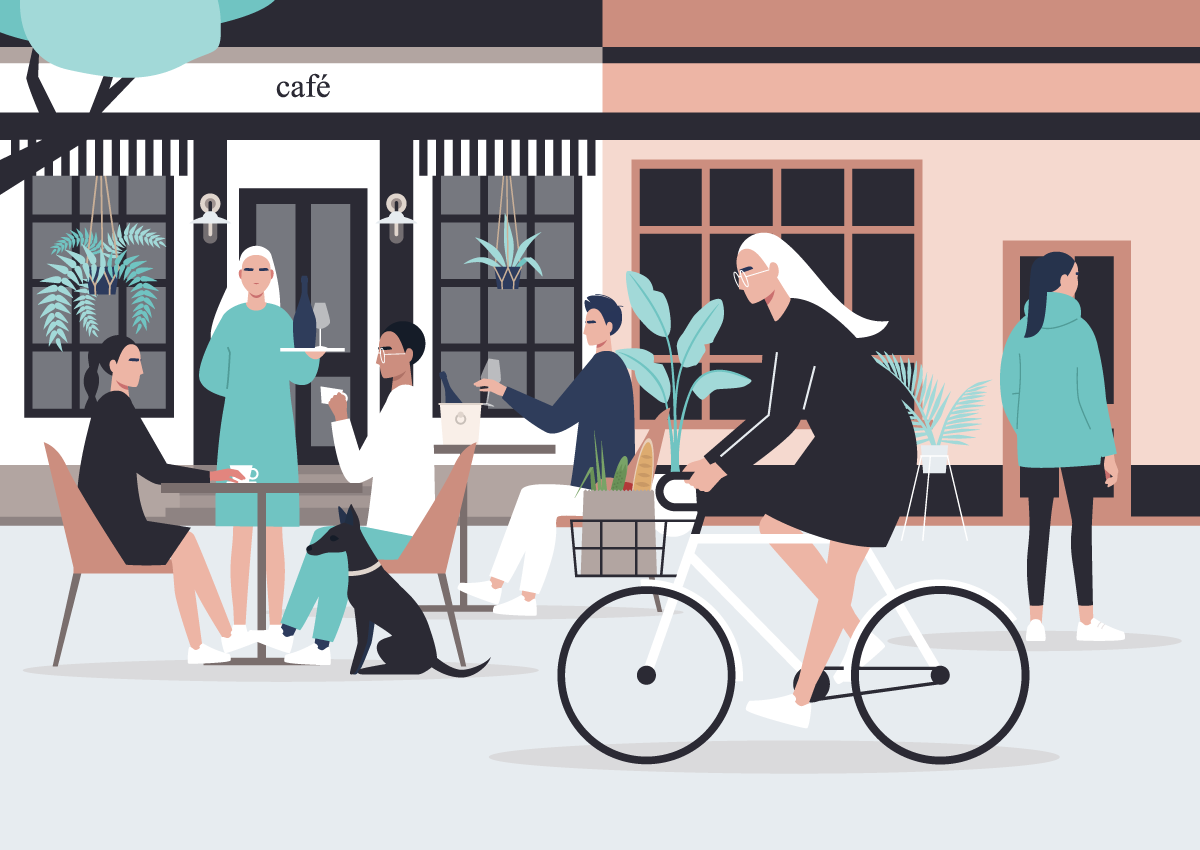 One of the unexpected outcomes from the changes we’ve all had to endure in recent months is the move to outdoor dining. Having spent a fair amount of time in cities in many parts of the world, one of my favourite things to do is to sit in an outdoor cafe sipping coffee whilst watching the world go by. If I'm sharing this pleasure with my wife, it also allows us to indulge our passion for our favourite holiday game called ‘See It’, which is derived from a game her family played with their father. The winner of the original game was the first person to see and shout ‘See It’ when the SSS Enterprise emerged in the opening credits of Star Trek. We have adapted this game where we pick a local topic [for example, monks and nuns in Rome] and keep a tally of who first spots most of them in the duration of our stay.

For reasons mostly connected to availability of space and climate, outdoor dining has been a relatively rare and short-lived experience in the UK. However, they say necessity is the mother of invention and it has recently become a major feature in many of our towns and cities which has saved many a restauranteur from oblivion.

I saw this to its fullest extent on a trip to Soho a few weeks ago. Whilst strolling down Greek St on passing the entrance to Old Compton St, I came across a huge mass of pavement diners and drinkers the likes of which I've never seen in London. The place was buzzing and felt rather special, made possible by Westminster council running a scheme to close roads in the evening and pedestrianising certain streets.

As summer draws to a close and with the inevitable onslaught of more suspect weather, a number of councils are rethinking their approach to outdoor dining. While it has been hugely popular for the beleaguered hospitality industry and its clients, it is a major issue for local residents. Whilst the move to outdoor dining has helped the hospitality sector recoup some of the significant losses incurred during the pandemic, they undoubtedly see the opportunity to significantly increase revenues particularly as they have invested in heaters, tables and coverings to enable outdoor dining and it may also be the case that some people are not ready to dine inside quite yet.

Any of you who spent time in New York will know that many people there dine out more regularly than eating at home. A good friend of mine moved there in 2014 and told me when I visited her a couple of years later that neither she nor her husband had ever used the oven in their apartment since their arrival. On speaking to her about her experiences of the pandemic she told me how incredibly quickly New York had adapted to outdoor dining, in her words it literally happened overnight, perhaps not surprising in a city where the hospitality industry is such an important part of the local economy. In July this year Governor Andrew Cuomo signed an executive order to allow restaurants to continue using sidewalks and streets for outdoor dining for an extra year.

With a number of different interest groups at play in this dilemma (residents, councils, local businesses, motorists and the government), it will be interesting to see how this all plays out in the UK. As in most conflicts where money is involved it is possible to understand the issues from both sides. It's undeniable that people who have lived in these areas have been subject to levels of noise prior to the outdoor dining revolution, one can understand their objections to a significant long-term increase. At the same time, having suffered losses due to the loss in trade, the longer-term prospects for those businesses who can capitalise on outdoor dining in the longer term are inevitably improved.

What is interesting is to understand is whether any of the local restauranteurs have considered more imaginative ways of winning over the local residents, for example as is the case for people who live in the congestion charge offering significant discounts to compensate for the inconvenience being caused. Weather permitting, I'm sure we’d all like to enjoy the benefits of more outdoor dining in the future. In any negotiation for there to be a positive outcome somebody has to concede something and the party that is benefiting from the concession needs to think creatively about what it can offer in order to get what it needs.